Last week I made a trip which I had been planning for the one year. It was much like one which I had first made 10 years prior, under the very same circumstances. I felt the same bittersweet wave of emotions that come with the excitement of new beginnings; coupled with the anxiety of having to let go of something precious. As parents, we all face the time when our children must leave the nest and venture forth on their own. For me, it has always been a little more premature than most, as my children have all gone to boarding school for the last 3 years of their secondary school cycle.

Enjoying the moment when we are all together.

Many years ago, my husband and I embarked on this path in the education of our children. Back then, it was a true leap of faith for our family. Today we can look at the decision with wonder and gratitude at how it all panned out, and the benefits of the choice we made. In 2008 we took our eldest child to boarding school. As crazy at it seems, we had never visited the school prior to that day and did not know the area at all. We departed from a busy metropolis guided by our GPS and drove a few hours into a different state. The landscape changed from bustling and modern to rural. As far as the eye could see, we were surrounded by corn and soy fields along with the occasional tractors, barn and grain silos. I could not help but wonder whether we had taken a wrong turn somewhere and mistakenly ended up in the heartland and bread basket of America. Could the school possibly be located here amid this rolling picturesque countryside? When we finally arrived at our destination, it was a perfect little enclave, nestled amid the agricultural zones and a majestic lake. It was awesomely beautiful.

A typical sight in the Midwest, fields of soy.

After several long hours of registration, uniform fittings, a campus tour and dorm meetings we had to say goodbye. It was such a painful moment and one which I shall never forget. The rupturing of the status quo, the moment when you relinquish your daily parental control over your offspring and make him or her accountable for themselves is an extremely rough one. It was the hardest thing to do, but had we not believed that our child was capable and in good hands, this would never have occurred. It took courage by both parties to say a most painful goodbye. Many tears were shed but in time, we all adapted to our new normal and the sacrifices that were made that day paid off gloriously in the ensuing years.

The next year, our second son followed suite. He could hardly wait to join his older brother at the Academy. Again we followed the same protocols for the beginning of the school year. As painful as it was once again to bid farewell to another child at such a tender age, it was not as devastating as the year before. We now had a reference point for the experience and knew the way that things worked. The great consolation was that both boys would be together and would share the experience alongside each other. Our family of 5 at home had shrunk once again. Sitting around the dining table with 2 empty spaces was extremely hard at first. My youngest child missed her older siblings terribly in those early days. I realized that it would be necessary to teach her that we needed to cherish the moments when we were together. From then on it was all about the quality of time versus the quantity of time together. We all needed to learn to value the moments we shared when we could be together as a family; regardless of how short they were. After high school would come college years and it was clear that my daughter would not have her brothers growing up alongside in the same home for at least 7 years. Ironically, when they would return home, it would almost be the time when she herself would be ready to leave.

Here we were following the same familiar route once again with our youngest child on a Sunday morning in August 2018. This time, it was our daughter’s turn to follow a path which has now become a tradition for our family. The preparations were meticulously made throughout the year. I must admit there were moments when I wondered whether this was the right thing to do. People often commented that it was one thing to send the boys but why would we let our daughter go to boarding school as well? She is still just 14. I thought about this and realized that I did not want to practice double standard parenting. Did I let my sons go to boarding school at the age of 15 because they were male? Was it easier to let a boy leave the home than a girl? My answer is that it is just as hard for either sex and the same rules for parenting apply to both male and female children. 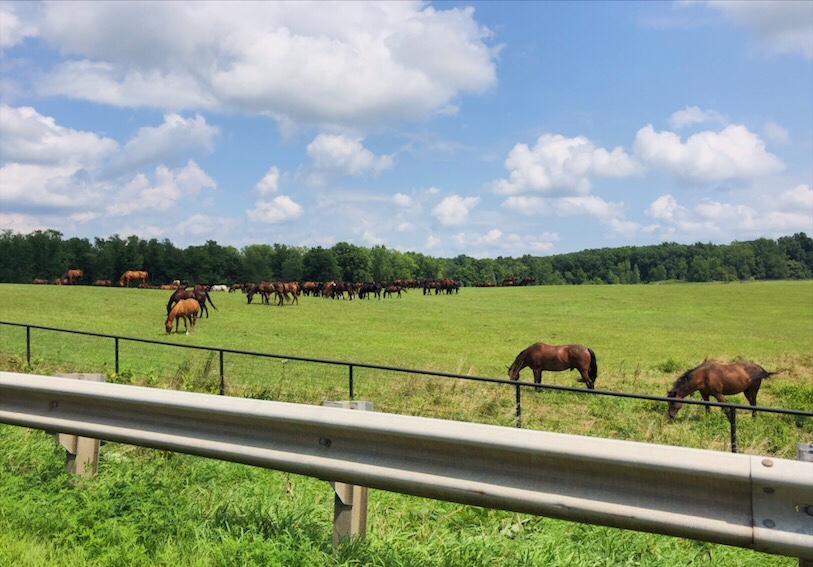 Horses from school grazing in a nearby pasture.

When I left my daughter at her dormitory last weekend, we were both inconsolable. As we clutched each other tightly, I felt a deep sharp pain in my heart and I found it hard to release her from my arms as we hugged each other goodbye for the last time. It was one of the saddest moments I have experienced, and it brought me back to the same place 10 years prior as I left my eldest son putting on a brave face, standing on the side walk alone waving goodbye to us. It was not because she is a girl that I ached, but rather because she is my child. I knew that as difficult a decision it was, I was leaving her in capable hands and with good mentors in a wonderful school and environment. The next day I made a completely unplanned trip back to campus to complete some office work, unbeknownst to her. From afar, I saw my child busy and involved in an activity with other international students. I could see she was doing well and was happy. When she realized I was there, she ran to me and hugged me. She whispered as she squeezed me “It’s okay Mom, I am fine now. You don’t have to worry!” I was able to leave the campus with peace in my heart. The invisible cord which bound us together from day she entered the world from my womb had been cut. She had once been totally dependent on me for everything and now she was taking her own breaths. We both know that we love each other deeply but now we share the confidence of letting each other go and to function separately. My daughter has found her independence and her strength and I found mine as well.

Those last hugs before a goodbye.

What a powerful moment and a huge milestone reached to see your child as a mature person, embarking on a journey of self exploration and discovery. It’s the most beautiful thing as a parent to discover that your investment in nurturing and caring of your children over the years has culminated in their ability to step forward and take capable and responsible steps on their own. Education has always been a hallmark and passion in my life. Had I felt that each one of my children at the moment of leaving home was not mature enough to handle the pressure and stress associated with the move, I would never had opted for this choice. The results which I have seen on the character and wellbeing of my children are phenomenal. It is through experiences in places such as this, which offer a platform to learn and develop life skills in a high motivated and controlled environment.

On the flip side, my children know that without a shadow of doubt, that both their father and I are here for them anytime they need us. Love is manifested in so many ways. As a parent who adores their offspring above all, I have learned that it is essential not to limit their education solely on my views. I want them to mature into adulthood with a global view and an appreciation and respect for themselves and others. In order to be accomplished, they must be able to take care of themselves first before they can lead and take care of others. As much as I miss my baby girl every hour of everyday, I have learned the value of allowing her to carve her path and become the best version of herself possible. Home is home, and I patiently await her return to hear about her new life and adventures.