The Lent season which is the 40 day religious period of prayer, reflection and penance in the Christian traditions will begin next Wednesday. The Lent period then officially ends on Easter Sunday. This weekend and the days leading up to Ash Wednesday will be ones of excesses for some, with the Carnival festivals enjoyed in countries with this culture. Probably the most well known Carnivals world wide are those in Brazil, Trinidad, New Orleans and Venice, where people revel during the 3 days of festivities. In Haïti, where I live, Carnival is also a big deal with widespread celebration. Mardi Gras or Fat Tuesday is the day before Lent begins. The tradition of consuming fatty, rich and highly calorific foods during these 3 days of activities is well known. It is seen as last hurrah before the 6 weeks of traditional scaling back on rich foods and alcohol are observed. Other traditions are meatless Fridays where one should eat fish. Often time, these age old traditions are no longer practiced as they were in the past.

There are no carnival activities in Guyana associated with pre-Lent celebrations. In my family, we adhered to all of the traditions of our Catholic religion. My grandmother Celestine was a devout Catholic of half Portuguese descent. She made wonderful pancakes and we could hardly wait for Shrove Tuesday which we affectionately dubbed “Pancake Day” to enjoy them. The little pancakes much like a donut, were light and fluffy and the accompanying syrup was not too sweet or cloying. The combination was just perfect. My mom also made them well, but traditionally only one family member at a time made these pancakes; as the yield was great and they did not keep for too long. I often wonder why we only ate these lovely things just once a year?

Every Shrove Tuesday, a lovely rich batter of eggs, milk, flour, yeast and spices was concocted. The dough would rest for a few hours to rise and double in volume and then be fried into small balls. They would then be accompanied by a homemade syrup for drizzling over the delicious little gems of goodness. Families made large portions of these Portuguese pancakes traditionally known as Malasadas. They would then be distributed to family members and friends who would happily devour them as a last sweet dessert before Easter Sunday 40 days later.

As a child, at St Agnes’ Primary School all students would go to mass at the chapel at St. Agnes for ashes on Ash Wednesday. As a penitence, we were all encouraged to give up something we loved during the Lent season. This is done in remembrance of Jesus’ withdrawal and sacrifice in the desert for 40 days. It had to absolutely be something which you enjoyed immensely as it was a sacrifice after all. Usually we were encouraged to give up sweets, desserts, breads, soft drinks, fried foods or something of the sort. You couldn’t sacrifice veggies or doing housework or not tidying up your room. It was always crazy that those little sacrifices were so hard, especially during the first couple of weeks. For me it was always chocolate. How I loved then and still do a little piece of Cadbury’s chocolate; whole nut or fruit & nut! As an adult, someone mentioned to me that you didn’t have to sacrifice something, that you do something good instead!! Easier trade off!! 😊

So here a recipe which I have researched and put my own twist on. It’s very similar to my grandmother’s recipe which like so many things we grew up knowing and loving but was never written down. Oral traditions are wonderful but often in a few generations can be lost. I feel some duty to replicate and safeguard some of my culture and traditions for this and the next generation. It’s amazing how so much is lost once we cannot practice the little things which endear us to memories of our past.

Happy Carnival weekend to those who celebrate. In Haïti, we traditionally make banana beignets. I have a post on my blog for these if you’re interested. They are very good as well. Try this Malasadas recipe and make some loved ones happy. You don’t have to have any Portuguese ancestry to enjoy these. It’s a piece of Guyanese tradition which I grew up with and makes me nostalgic for the past.

In a bowl, add yeast and sugar. Mix together with warm water. You must be able to comfortably put your finger into the warm water. If too hot you will kill the yeast.

Set aside for a few minutes until it starts to bubble.

Add the 3/4 cup flour and combine. Cover and set aside.

In the mixing bowl of an electric mixer, add the eggs and beat for a few minutes until frothy.

Add the yeast mixture to the eggs now. Combine together.

Add the remaining flour and mix on low to combine to a smooth mixture. 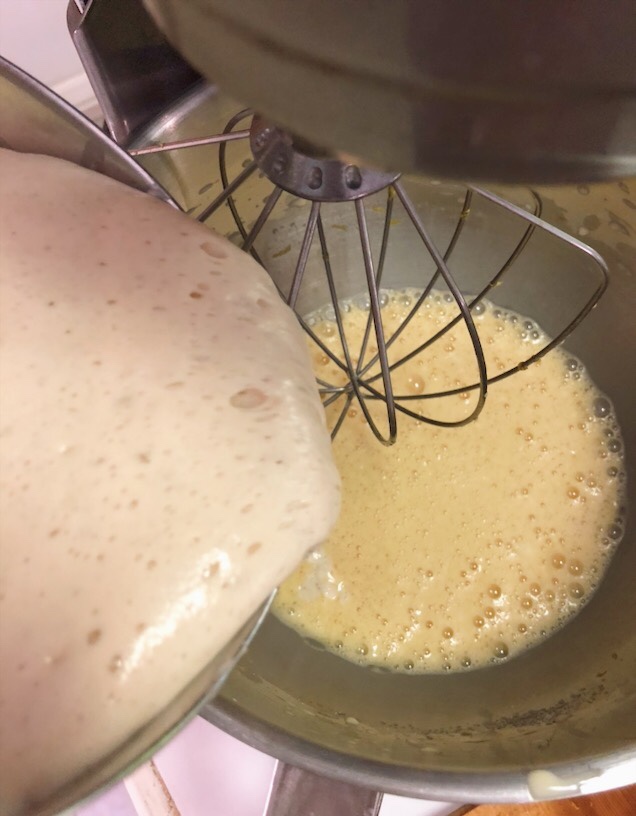 With beaten eggs with yeast starter being added

Cover with plastic wrap and leave in a warm place to double in size. For about 1 1/2 to 2 hours. Please ensure that you use a large and deep enough bowl is it will ore than double in volume. Stir the batter once again. It will deflate but you can now begin to fry the pancakes. 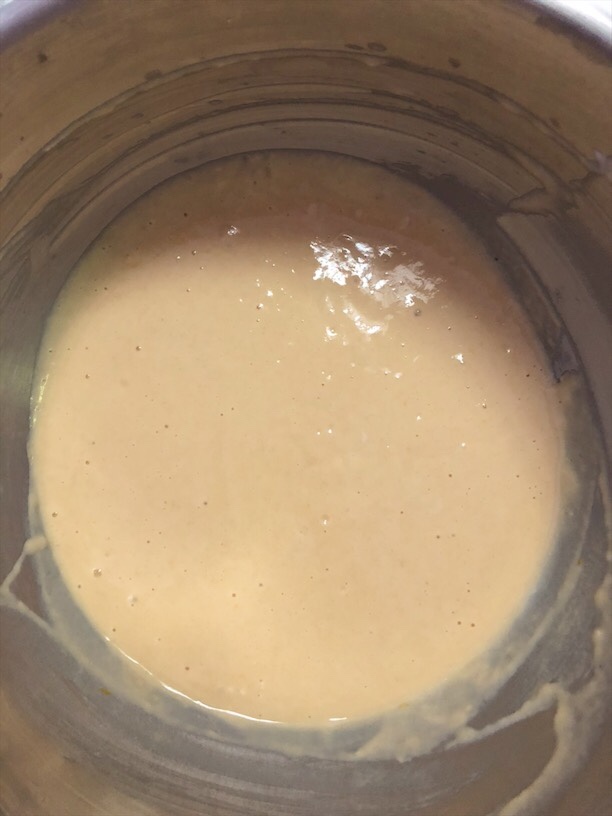 The finished dough upon mixing

In a medium pot, add the ingredients for the syrup. Bring to a boil and allow to cook in a low heat for no more than 10 minutes. Do not over boil or the sugar syrup will crystallize. Strain when cool. 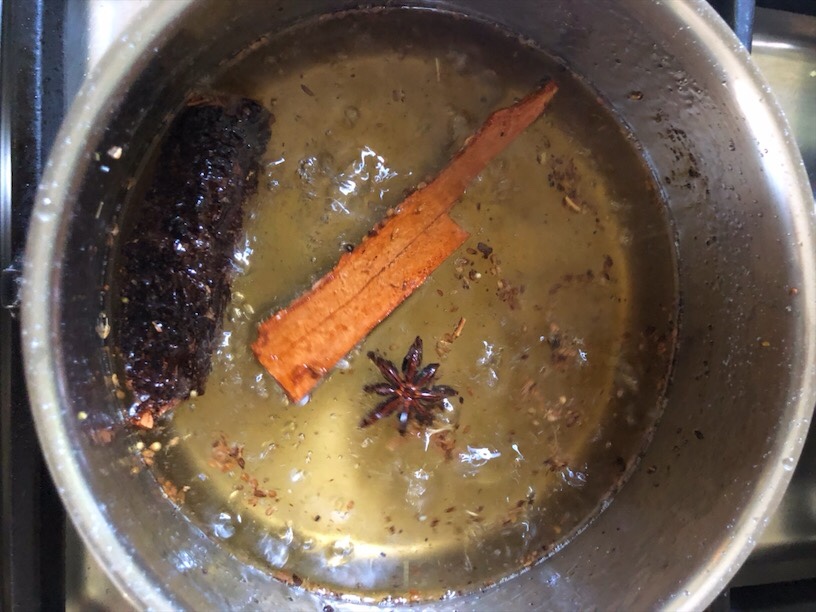 Heat the oil in a heavy casserole. Test for readiness by trying a small bit of dough. The dough should rise to the top when released and not sink to the bottom of the oil.

Use a table spoons or small cookie scoop 1″ diameter to make the Malasadas. Do not overcrowd the pancakes while frying as they balloon up.

Note that even though I used a cookie scoop, my pancakes were various shapes. The dough is extremely sticky so as I released each one over the hot oil, they elongated a bit. No worries, they taste delicious. if you can figure out a way to keep the form perfectly round; power to you! Please let me know how you achieved this!!

Have a large container lined with paper towel to hold place the fried pancake puffs. 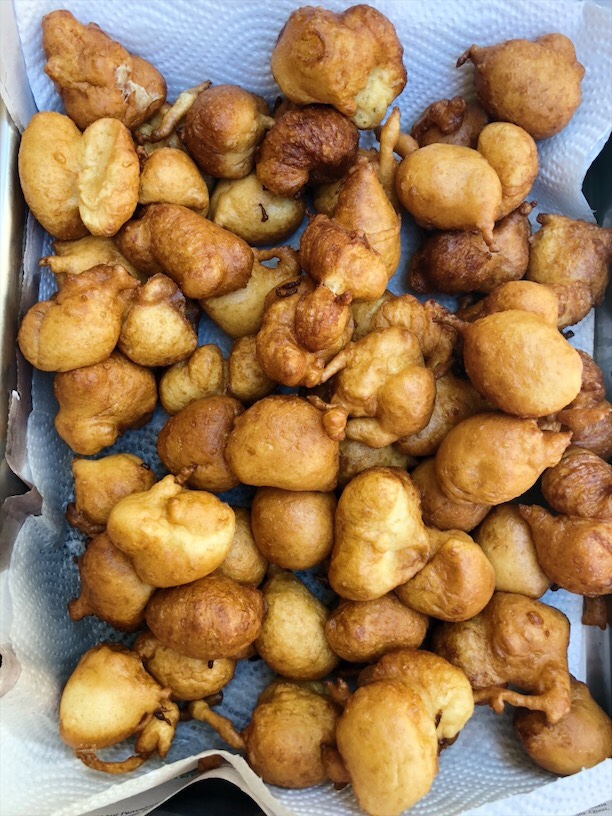 Strain the syrup before serving.

Serve with syrup alongside pancakes. I would advise not to pour the syrup over the entire portion as it will make your pancakes soggy. It is better to serve alongside and allow each person to put a bit of syrup over their own portion.