Cassava is a root tuber which we in the Caribbean know well. It is actually native to this part of the world and has been cultivated in the northern portions of South America, Southern meso America and the Caribbean for ten thousand years. This starch tuber is also known as manioc or yuca. Cassava has become the third largest source of carbohydrates in the tropics. It is preceded only by rice and maize. Ancient people relied greatly on the cassava root as a staple and important source of nourishment. Cassava is a good resistant crop as it can be cultivated on poor soil and still give a yield. The Amerindians became experts at cultivating the two types of cassava, sweet and bitter. Their expertise led them to develop ways of extracting the deadly cyanide content from the bitter cassava, rendering it edible and used for making kassiri; an alcoholic drink as well as casareep a syrup staple for making pepperpot, which has highly natural preservative properties.

Cassava bread is widely made and consumed in all over the Caribbean region. In Haïti it is known as kassav. It is made by a labor intensive process, but yields a dried flatbread which is gluten free and rich in fiber. It can be stored without refrigeration for a long period of time and makes it much more practical to store than wheat bread. Cassava and it’s bi products are high in carbohydrates and are rather calorific. The raw cassava is grated and then all of the juices are extracted with force to make the cassava meal or masa into a dry powdery consistency. The dried cassava meal is then formed into flat discs. At this point it is slowly baked on large metal surfaces over a fire drying it further and making it into cassava bread.

Cassava goes well with coconut. In Haïti, coconut stuffed kassav is very popular. It is delicious filled with a sweetened coconut filling and is a very popular and well loved breakfast food. Recently I had been given a great deal of coconut kassav from the Cap Haïtian area in the North of Haïti. I wanted to do something else with it besides toasting it lightly and eating it with peanut butter or jelly. In Guyana we make a great deal of cassava pone with freshly grated cassava, I thought if I reconstituted it with a liquid, it would give me more or less the texture of the grated cassava. As the dried kassav has had the liquids removed, it is slightly less starch than the fresh casssava. I thought about rehydrating the dried kassav and combining it with a custard. The cassava coconut pudding was born and it did not disappoint. As I used eggs for the custard, it had a slightly different texture to cassava pone which has none. It is of a cross between a cassava pone and a bread pudding, which I ramped up to the next level with a raisin rum sauce.

Here’s my recipe for cassava coconut pudding made from cassava bread. In homage to our ancient ancestors who saw great value in this tuber and who gave us the legacy of cassava bread. I hope you enjoy it. 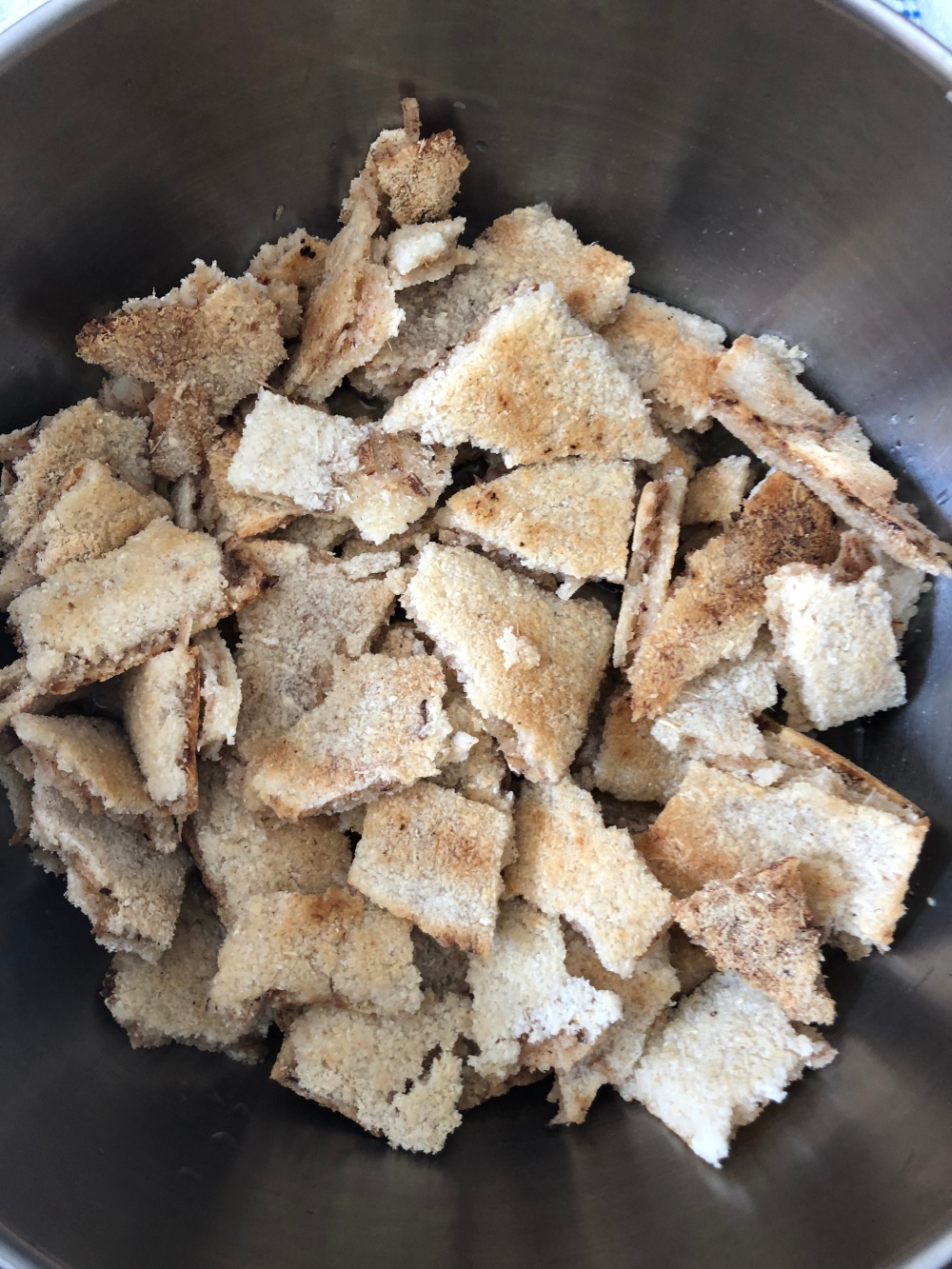 In a large bowl, break cassava pieces and soak in 3 cups water. Break down cassava into a mush with a vegetable masher until the dry pieces have all become moistened and mushy.

If you are using regular cassava bread, you would do the same as above and then add the grated cassava to the mix.

The texture of the moistened cassava bread

In another bowl, add the coconut milk, sweeter condensed milk, milk and combine.

Beat eggs and add the vanilla extract along with the rum if using together. Pour into the milk mixture and stir to combine. 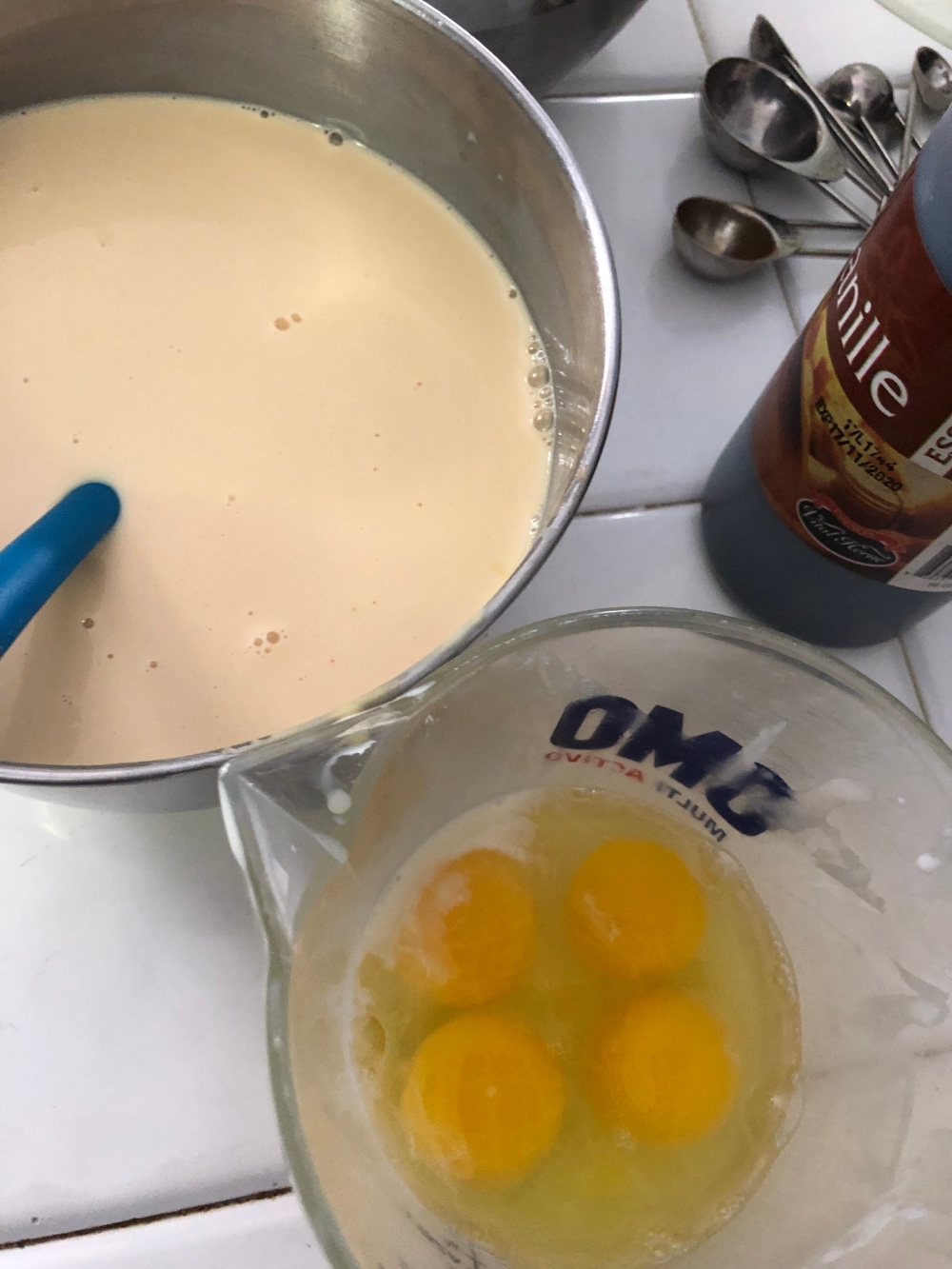 Ingredients for the custard

Add the dried spices and sugar to the milk mixture and pour over the cassava mixture. Combine all of the ingredient well with the help of an immersion blender. You may also use a blender or food processor for this stage. The intention is to make a homogenized mixture with no clumps.

If using raisins, add them at this point. I did not add raisins to mine as I made the rum and raisin sauce for serving along side.

Pour cassava pudding mix into a well buttered 9 x 14″ glass dish or baking tin. Sprinkle with a little brown sugar and dust with grated nutmeg. I actually had enough for a another little Pyrex dish about 8 x 8″. 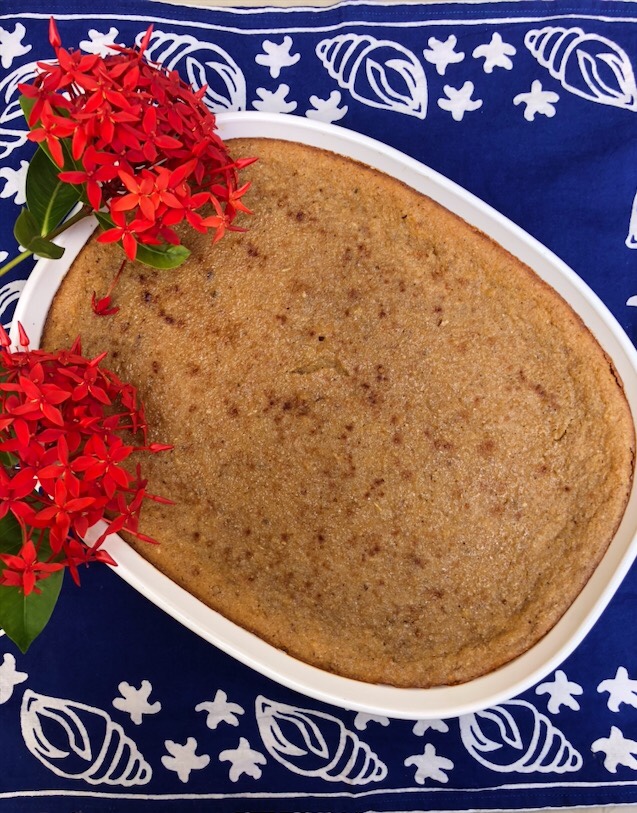 In a bowl, add the raisins and pour the rum over. Allow them to plump for about 30 minutes.

In a heavy saucepan melt butter and sugar over medium heat for about 2 minutes. Stir constantly.

Add the cream, rum and raisins and bring to a simmer.

Cook on a low flame for about 5 minutes.